by Lazlo interviews From Good Homes 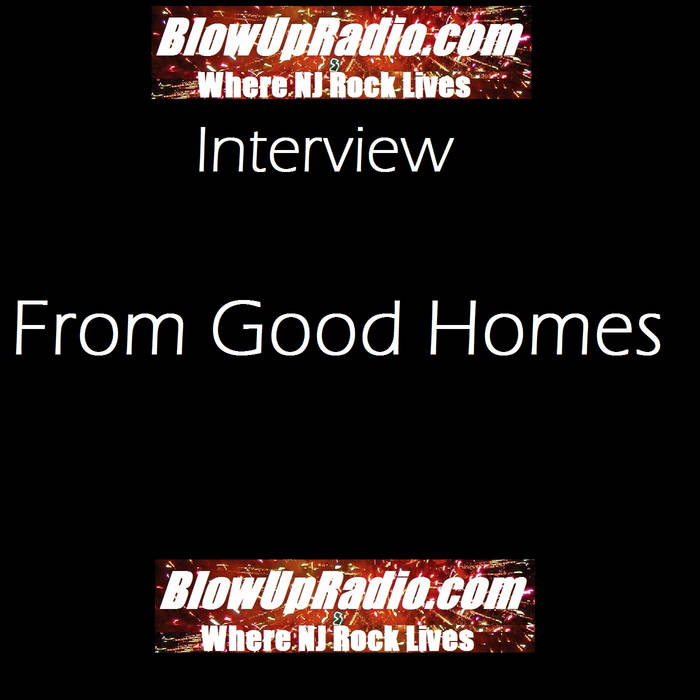 The genesis of From Good Homes dates back to a high school band, when childhood friends Todd Sheaffer, Brady Rymer, and Patrick Fitzsimmons came together in rural, Northwestern NJ to play some music. Originally called "Old Crow", and later evolving into "The Dogs", the core line-up remained. With the addition of Dan Myers in 1988, and Jamie Coan in 1990, the band From Good Homes was fully formed. (Incidentally, the band's name was born out of a brush with the law. They were playing a hometown show when the bar owner decided to close down early - before the band had gotten a chance to perform a song that they'd rehearsed all week ("IOU", by The Replacements). Disappointed, the band departed…but decided to return in the wee hours of the morning and break into the bar to perform the song (with amplifiers turned up to "10"). They were arrested and appeared in court, where the judge sentenced them to community service - since they seemed to be "from good homes".)

The band's upbeat approach, solid songwriting, and unique sound allowed them to quickly develop a dedicated following on the touring circuit. Bringing together rock, jazz, folk, celtic and jam-band influences under one umbrella, rooted in Todd Sheaffer's inspired songwriting, From Good Homes forged their own, instantly lovable music Their feel-good vibe prompted one critic to affectionately label the band's blend of influences as "Hick-Pop". They made fans want to kick on the dancin' shoes from day one. As the band members themselves have stated: "We wanted first and foremost to make a real and honest form of music that moved people (both their brains and their butts) and left them, over all, feeling good."

The early 90s saw the band touring regularly up and down the East Coast, soon expanding their circuit to Colorado and other regions. The fan base grew, and the gigs got bigger and bigger. During this period, FGH would frequently perform with other up-and-coming acts, including Hootie & The Blowfish, Dave Matthews Band, and Blues Traveller (all of whom opened shows for them at one point or another). 1994 was a breakthrough year for From Good Homes. In the summer, they released their indie debut - the appropriately titled "Hick-Pop Comin' At Ya" - on their own GRRRrrrr Records label. They also signed a major label deal with RCA Records, and began an annual tradition - a summer concert before thousands of eager hometown fans at Stanhope, NJ's Waterloo Village. With an enthusiastic and ever-growing fan base, and a record deal in place, the future looked bright for the group.

"Open Up The Sky", From Good Homes' major label debut on RCA Records, was released in April, 1995 and the band embarked on a year-long national tour, opening arena dates for Dave Matthews Band, Ratdog, and others, while also headlining many club dates. Two of the band's songs were included in the 1997 Twentieth Century Fox release "Picture Perfect", (featuring Jennifer Aniston & Kevin Bacon). "Open Up The Sky" was followed up with the release of a live EP ("Live At Waterloo") in 1997, and the self-titled "From Good Homes" (1998). In 1998, From Good Homes received an achievement award from Billboard and Irving Plaza for the most consecutive sold-out performances ever (12) at this respected NYC venue.

Parting ways with RCA at the end of 1998, From Good Homes commenced work on a new album during the winter of 1998/1999, but the band decided to call it quits before the project could be fully completed. On August 7, 1999, From Good Homes performed a farewell concert at Waterloo Village - where they had performed to frenzied crowds every summer since 1994. Some 5,000 people turned up to see the band off in style, as FGH worked its way through 3 hours of classic material. The show was professionally recorded for posterity, and in 2002 From Good Homes teamed up with Washington DC-based indie label BOS Music to release "Take Enough Home" - a single-disc version of the show. The album captures the best cuts from the final show, highlighting special songs from throughout the band's illustrious career. The disc also included a bonus - a previously unreleased studio track ("Into The Light").

After disbanding in 1999, the band went on to embark on individual projects. Todd Sheaffer formed the bluegrass-influenced Railroad Earth, which has released 5 records and continues to sell out shows throughout North America. Brady Rymer started releasing children's music and his 2008 release "Here Comes Brady Rymer and the Little Band that Could" was nominated for a Grammy Award in the Best Musical Album for Children category. Drummer Patrick Fitzsimmons has had a very successful run as a singer/songwriter, releasing 5 records independently and touring regularly in the northeast. Saxophonist Dan Myers runs a production company, Dirt Floor Studio, and has worked on records with Adam Green, Sam Champion, as well as with Rymer and Fitzsimmons. Multi-instrumentalist Jamie Coan continues to write, perform and record and is currently the fiddle and dobro player for The Red Top Ramblers in the Charleston, SC area. And, all the while, the FGH fan base has remained intact, refusing to acknowledge the demise of their favorite group…

On October 1, 2009, the members of From Good Homes announced that the band will reunite for their first public performances in over 10 years. The shows, scheduled for December 18th & 19th at the Wellmont Theatre in Montclair, NJ will mark the first time the band has performed together since the band's "farewell show" on August 7, 1999. "It'll be great to get back on stage with the guys and play again" says lead singer Todd Sheaffer. "It's been a long time since the From Good Homes family was together and I know this is going to be a whole lot of fun."