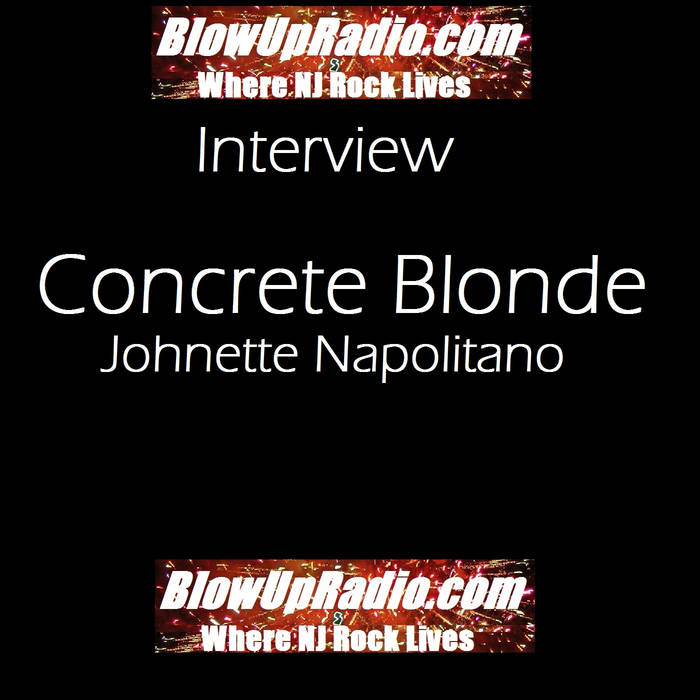 When singer/songwriter/bassist Johnette Napolitano first formed Dream 6 on her time off working at L.A.’s famed Gold Star Studios with James Mankey in 1982, the music landscape was a lot like it is now, forcing new acts into a do-it-yourself ethic. Four years later, when Napolitano and Mankey renamed the band Concrete Blonde — from a purported suggestion by labelmate Michael Stipe — they signed to Miles Copeland’s I.R.S. Records, who provided a home for the emerging punk/New Wave scene.

“I love the new music business,” enthuses Napolitano from the five-acre ranch in Joshua Tree she’s lived in for the better part of a decade, having just fed her two horses, two goats, three dogs and school of fish. “Technology is made for me because I can live wherever I want. Wayne Kramer installed my first set of Pro Tools back in 1991. This is the best thing to happen for musicians. It’s like when Brett Gurewitz launched Epitaph or Posh Boy started. Nobody would put out our stuff back then. It’s easier and better now because you have the Internet to promote your music.”

For a band with one foot in the modern world, and another in the past, Concrete Blonde has decided to release its two new songs, the country lament “Rosalee” and the vintage speeded-up punk-rock of “I See the Ghost,” in an old-school way as the A- and B- sides of a beautifully designed, white 7” vinyl single, though it will also be available at all digital outlets.

“We knew we were doing this for vinyl,” she says of the tracks, recorded at Stagg Street Studios in Van Nuys with their longtime engineer Anne Catalino. “So you have this A-side, which is an old ’30s cowboy song that I imagined Willie Nelson doing, and on the B-side, you have a 1980 West Coast punk song. And they both sound as if they belong on vinyl.”

Indeed, “Rosalee” is a product of Johnette’s desert environment, a ballad sung around the campfire by a lonesome cowboy missing his lost love. “She wraps herself in firelight,” croons Napolitano. “And dances in the sand like a ghost.” The flip side, “I See the Ghost,” is a vintage syncopated punk rave-up that also references the spiritual, a fascination for Napolitano, an admitted fan of eccentrics like Joe Meek, Upton Sinclair and Nikola Tesla — an image of whom she sports as a tattoo — since manning a psychic hot line back on Y2K eve. “James and I couldn’t make it through without stopping to breathe. It’s about people who think they can get away with things, who try to fake their way through life . . . [who think] that they’re always being watched.”

This comes after the band has played shows in China last year, as well as in Peru and Brazil, where they recorded their 2003 double-live album. A European tour is planned as well.

It’s all part of a spate of activity prompted by the deaths of Johnette and James’ fathers over the past two years, which coincided with the 20th anniversary of Bloodletting, their most commercially successful album, reissued at the time in a re-mastered, unauthorized, deluxe box set with six bonus tracks by Shout! Factory.

Concrete Blonde released five studio albums on I.R.S. Records, starting with their self-titled debut, through Free (1989), Bloodletting (1990), Walking in London (1992) and Mexican Moon (1993). The band’s single, “Joey,” from Bloodletting, a cautionary tale of an alcoholic, hit the Billboard Top 20 and went #1 at Modern Rock, while other singles like “God is a Bullet,” “Caroline,” “Everybody Knows,” “Someday?,” “Ghost of a Texas Ladies Man” and “Heal It Up” were all Top 20 Alternative hits. The B-side of “Joey,” “I Want You,” was featured in Oscar winner Kathryn Bigelow’s 1991 cult film, Point Break.

After breaking up in 1993, Concrete Blonde reformed in 1997, when they released Concrete Blonde Y Los Illegals, a collaboration with the L.A. Chicano punk band, and then again in 2001, recording Group Therapy (2002) and Mojave (2004), the latter featuring new (and current) drummer Gabriel Ramirez replacing original member Harry Rushakoff.

Inspired by her peaceful surroundings, Johnette has been able to tune out the distractions of urban civilization by concentrating on her art, which involved a great deal of communicating with, well, the ghosts which surround her. She hasn’t had a TV since 9/11 and often entertains herself by listening to the radio. You can regularly find her tuning into to Art Bell’s Coast to Coast, which intermingles on her airwaves with a local Navajo station to create just the right sort of eerie mix that marks Concrete Blonde’s latest music.

“I’ll wake up at 3 in the morning and just have to write it down, not even knowing where it came from,” she explains of her creative method. “These aren’t my songs. They come to me in one piece, sometimes with chords I don’t even know how to play. I believe in the collective consciousness of things coming to you and then receiving them.”

With a recent homecoming performance at L.A.’s Troubadour — which they were playing for the first time — Concrete Blonde is enjoying the process of reconnecting with old fans, and making new ones.

“It’s taken awhile, but we’re really happy where we are,” says Napolitano, who has spent the last decade learning about art in Mexico and the flamenco in Spain, as well as how to sew and tattoo. “As a unit, we’re just amazing and completely self-sufficient. We’ve come to the place where we trust ourselves. And as long as the music is good . . . that has never changed. It’s all about being fucking great. We are very vain that way. We have to be the best or we won’t bother.”

Listen to Concrete Blonde and you can almost feel the ghost.